Supporting the Government of Gibraltar to renovate Europa Point

Europa Point is a mythic and prominent landmark on Gibraltar – the southernmost point of the island and one of the famous Pillars of Hercules. It’s home to the Trinity lighthouse with cliffs looming behind and offering stunning views across the sea to North Africa. Between 2010 and 2012 we supplemented the Government of Gibraltar’s infrastructure project to develop the area, giving over £600,000 towards the Kusuma Promenade

This was our first major infrastructure project in Gibraltar, and we were lucky to work in partnership with the Government of Gibraltar on the final stages of the development’, says Michelle Tosso, our Country Manager in Gibraltar. ‘The western edge of the promenade needed to be landscaped, beautified and made safe for the many tourists and locals who come to enjoy this spot on the island’.

Costing over £600,000 in total, the Kusuma Promenade runs above the clifftop of Europa Point round the southern plateau and across to the newly uncovered gun mount, which has been converted into an interpretation centre. It was formally inaugurated by Chief Minister Fabian Picardo on the 29th May 2012.

‘We visited Europa Point often with our young children. To see the wide open seas from the cliff takes your breath away. It is also on the migratory route for birds between Africa and Europe, so you can see a variety of birds in the migratory seasons. Although it’s a stunning spot, very few people were ever out there. We were delighted to support when the Government of Gibraltar took on the development of the site.’
Dr Soma Pujari, Executive Director at the Kusuma Trust 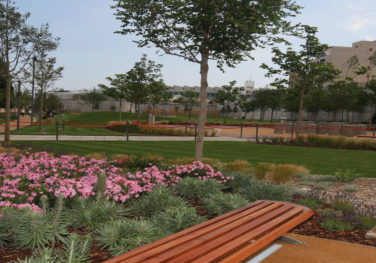 Between 2012 and 2014 we donated £700,000 towards the park, which would bring much-needed recreational space to the busy town centre.
Find out more
Access to Opportunity

Gibraltar’s size and geography means its charities have less access to specialist staff and industry knowledge than those in the UK.
Find out more